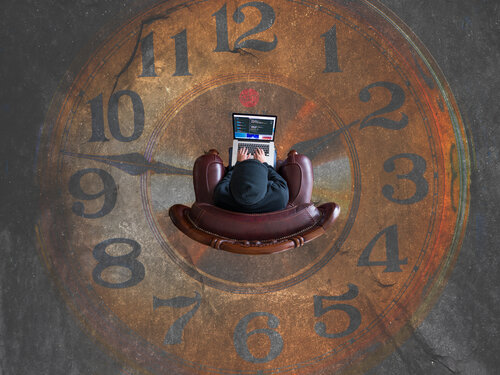 What Can Time Teach You About Your Trading?

Since my last post regarding Martial arts and trading, I have been consolidating my thoughts on ways to improve the mind set of when we trade. Lets face it. Mastering any craft, has no destination. Pit stops maybe, but you are forever on the journey to mastery. As long as you are humble to the concept that mastery is a journey then you will be open to ways on developing every skill that you feel will provide you the edge in this ever so challenging game of speculation and uncertainty.

Which leads me to a concept that is probably undermined and not much attention paid to it.

How Can Time Help Your Trading?

Now I am not saying that if you trade for 1 hour a day, only 1 hour a day, your trading will improve drastically. The idea of this post is to understand what we are doing in the “time” that we are exposed to the market. How is it that time can improve the way we trade and what can we learn from it?

To understand the concept that I am delivering, I will introduce to you Trader X. Trader X is someone who has subscribed to my “Review My Trading Journal” service and sends me his trading journal every week. I then explore patterns in his trading and areas that he may or may not be struggling with that he cannot see yet.

Trades Stocks, Swing trader turned Scalper, (might have been my fault that happened)

Pretty decent track record, he came to me when he had lost half of the value on his account, through perseverance and dedication he has now managed to redeem that capital and is going on to having great trading weeks.

I approached Trader x after exploring his journals and I could see a pattern forming. Trader X would always allow his trades to hit target, keep his risk to a minimum, get a little bit frustrated when price would be so close to his target, he would leave it, only to see his stop get hit. Trader X would document how he would feel and quite rightly, he didn’t allow it to bother him and he would go onto the next trade.

I decided i wanted him to try something out. I approached Trader X and explained to him I wanted him to “trial” out something that would, if done correctly and sticks to the criteria, would allow him to determine any flaws he may have in trading.

I wanted to determine if we can develop the skill of taking a win and taking a loss. What impact does this have?

I asked Trader X to take a series of trades. These trades would be closed within a set time period. E.g Scalpers would either choose 5 minutes,10 minutes, 15 minutes. Literally a stop clock counting down.

Now whatever happens. once the timer has completed. THE TRADE MUST BE CLOSED.

Set the risk parameters, only because anything can happen and you dont want your trade to be exposing you to a draw down and you not preserving your capital all for the sake of a stop clock not triggering.

This exercise is not engineered to make you money. The idea is to understand how you can handle the concept of FOMO and how well you manage your behaviour once this FOMO kicks in.

After a week, Trader X sent me his thoughts and pictures of the trades he took:

Here is are the details of the trial that you had me do.

I was a little nervous at the beginning. I followed my trading routine as you already know and executed the same strategy for all my trades during this trial. There was no hesitation when it came down to execution, There was no problem when the price was going against me, I been used to that type of exposure and as long as price does not hit my stop and when the price hit my stop then I would get out without any problems and accepted the trade did not work. The emotions started to flare up when the timer had 2 minutes left and the trade was going in my favour. I asked myself with some of the trades, it hasn’t hit my target yet and I doubt that it will hit my target in the next 2 minutes, What if I get out of the trade and then it would hit my target? I would be missing out on making some serious percentages to grow my account. I felt anxiety, that’s the best description I can give you of my emotions during this trial, it was like I knew the price was going to hit my target. On some of the trades, I stayed in for an extra 20 to 30 seconds to see if the price would hit my target but then I felt like shit because I was violating my commitment to your teachings, So I would get out and take a deep breath. I wrote down all this information and it took me to till the 3rd trade to figure out that I have not fully accepted the concept of uncertainty because if I did, I would not have those types of emotions. So I did this exercise while doing on the trial, I kept repeating to myself that I would get out of the trade when the timer hits, no matter what and that’s what I did even though I did not want to get out of the trade. I got the fuck out and accepted the outcome of the trade. I watched most of my trades hit my targets after and I would just sit there accepting that I am never going to know what is going to happen in the future, accept the outcome of the remaining of the trades on this trial. A very powerful exercise for sure, it definitely, brought more awareness to my trading. Now it’s time to head back to the lab and keep working on improving.

As you can see, this is from a trader who is happy with his trading, takes his trades sets his stops and targets. Yet Time has taught him something that has been lingering within his mind.

IS it possible that Trader X has realised a flaw in his trading that has been laying there dormant, ready to come out? Maybe its presence will arise at a time and cause Trader X to lose a hell of a lot of money.

What Trader X has accepted is he really does not have any control of what is happening.

This is what I wanted to achieve with this trial with Trader X. He now knows that, even of you are winning in trading, great, but always, always be aware that the irrational behaviour of the “Monkey Mind” will always be present. We will do things that on hindsight we will say “fuck sake, why did i do that?”

What To Take From This?

From Trader X’s perspective, its evident that he was struggling to accept that his trades, had he not had a timer in place, he would have been profitable and earn himself decent percentages on his account. But lingering behind the cortex’s of his mind, he was harvesting emotional triggers that came out.

The truth of the matter is this. The point of this exercise is to get you to realise that when you are trading, you will never know what the market will give you. Setting targets, they are great, but you can fall into the trap of being “married” to a target and price could fluctuate and be within a couple of pips or cents and still not hit your target, you as the trader will be thinking “Yeah it’s going to hit it” and then you are in the position where price has completely pulled away from your target area and is more likely to hit your stop…This has been done many times with my own trading and i am guilty of it to this day.

Try out the trial above and see if you can actually be committed to closing your trade within a set time. Explore your emotions after the trade and let me know.

P.s The Trend and Time are your friend.