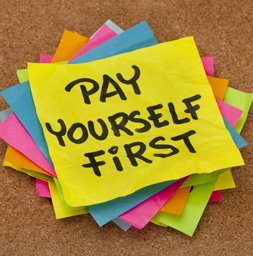 The Importance of Paying Yourself In Forex…

So we have a system in place that produces positive returns when applied optimaly, we have a routine that we follow religiously. We are watching our account balance grow. We are experiencing the “Traders Reality”.

Be careful…All that glitters, is not gold.

Everyone that enters into trading is fixated on how to trade, how to make the best entries using the right indicators. However throughout all of this, there is not so much empahsis on exits. Why? because we are psychologically challenged when a position is positive and drawn into a mindset of fear of missing out because if it can be in $100 profit, it can go to $1000 profit. Such a detrimental way of thinking.

I will welcome you to a time when the realisation of paying myself in forex had to be ingrained in my mind.

The Cost Of Thinking Emotionally…

Many Trades ago, i was set with my methodology, i was satisifed that there was nothing more i could change with my approach. I could take signals as and when they presented themselves. i had been relatively successful with a series of trades. I was trading the pair USDJPY.

It was a tuesday, no major news releases were to be released. it seemed as though the day was going to be the standard market maker behaviour.

Now my account, up until that point, had increased by 19% over a period of 9 months. Quite a decent return. I would wake up each day and before i traded, i would review the history of trades and i would be satisfied with viewing the account balance rise as i scrolled down the page. To say i was feeling euphoric and grateful that i was making money would be an understatement. But this way of thinking was acting as a deceptor-con. Little did i know i was feeding an emotional trigger. I was feeding the mindset of expectation. Because i reviewed my previous winning trades, i expected i would experience the same results. I became somewhat confident. Too confident if i may.

I had entered a trade and instantly price was going in my favour. I thought to myself: It just gets easier and easier. I had held this trade for a good 5 hours. It retraced, but price was still rising. I never placed any stops to protect my profit because i was convinced that the strength of the move would continue. HOW WRONG WAS I…

It was 2 am, and price was just ranging. I was sitting watching the trade, i had around $870 profit. I was sitting comfortably. Then out of nowhere. before i could even react, price had dropped 80 pips in a split second. My position turned negative and i lost $70. I instantly asked myself: “What was wrong in closing the trade at $870? I went through turmoil. I actually started to hate myself. I was so confident i believed that the market would just range. But the lesson i learned was this. ANYTHING CAN HAPPEN IN THE FACE OF UNCERTAINTY

You Never Go Broke Paying Yourself.

This is an old-age trading truism. Its simplicity and application is such a difficult concept for most new traders. Many times i have had a position that was showing profit, i would be thinking to myself: this is going to be a big pay out. I’m going to hold this till the very end.

You will never determine the end of a move. Take whatever is given to you

There have been many times where i have been humbled by the market.

The mistake i used to make was thinking that every move would be a homerun. This eventually would cost me so many opportunities to take profit.

The Key To Trading Is Not The Entry, It’s The Exit!

When i focused my attention on exits, i started to see my account grow. Give yourself a target of pips you are happy to make in one day. If you have an edge in the market, when applied optimaly, you are bound to generate at least a few pips on each trade. Do not pressurise yourself into forceful trading. If you don’t make the target pips, thats fine, there will always be another day to trade.

Key Points To Rememeber When Dealing with Profitable Trades: